A few notes on pack weight, specifically the gear carried during multi-day running and Ultra running races. I’ve spent many hours in the past trying to cut the weight I carry to limit the negative affect it would have on my running. This is particularly important in hilly Ultra running races. Every kg on your back makes a difference, slowing you down to the point where your running form is compromised.

Of course the blog is titled ‘Pack’ weight as I don’t want to get into a lengthy blog about ‘dieting’ and optimising body weight. Obviously it’s more important to work on reducing body weight before fine tuning pack weight. We’ll assume this as a separate subject.

A lot less pressure here than racing to get pack weight down and use minimal gear. On my multi-day training runs, especially those with heavy mileage like Coast to Coast I wanted to be able to run as much as possible. In preparation I would usually start by opening up a Gear List on Excel (I had already created these for previous events), and putting together a pile of everything I thought I might need, taking account of all-weather situations. As the day approached I would remove anything I didn’t feel I needed from the pile until I was down to minimal, essential gear. It’s better to do this in advance as you usually find you change your mind over a few days and eventually come up with a more refined pack. 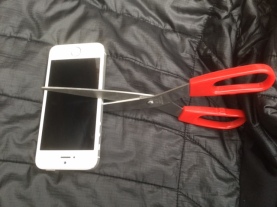 Once I had my final pile I’d look at further ways to reduce the weight eg swapping gear for lighter or smaller alternatives, and even trimming things down a pair of scissors! We’re only talking the odd gram of course but every little counts as far as I’m concerned, and it all adds up. A few grams here and there and before you know it you’ve saved yourself half to full kilo in pack weight. It’s a good habit to have if a little OCD.

Depending on how quick I want to run and distance I want to cover, as well as my intentions (am I there to enjoy the countryside too and have a wander, or simply TT) I’ll use lighter clothing where possible. You can get some quality clothing that has good waterproofing and wicking properties if you’re willing to spend some cash. Again, for me it depends on what I’m trying to achieve and how comfortable I want the experience to be. There’s also the question of accommodation. If I spend the night(s) at Hostels and B&Bs then I have no need for a tent or bivy bag, ground mat, sleeping bag. That alone would save 1.5-3kg in weight. 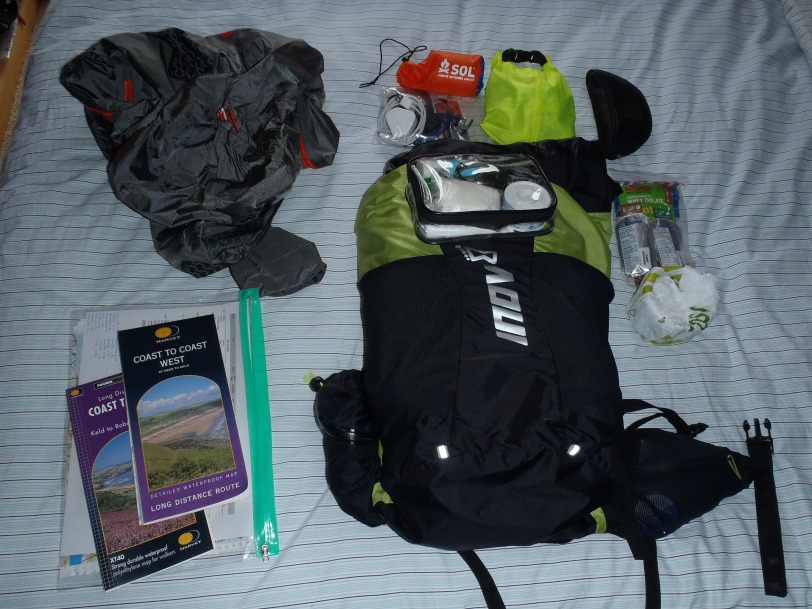 For navigation I personally prefer to use a pre-loaded tracker on my Garmin watch, with back-up maps (Harveys maps are great for the National Trails). The iphone is another back-up should I need it. I know some people use hand-held devices and clever apps. I personally prefer to keep my hands free as much as possible. I’ll look at the watch, and have the map tucked into my waist belt or a pocket for when it’s required. Overall this saves a lot more weight. The IPhone has a number of uses. As well as a back-up navigation tool and being able to look on the internet, it will show my current whereabouts to my family (I use the followmee app).

For overnight running I have a decent head torch and a back-up lightweight torch I wrap around the wrist. Again the iPhone is another back-up although it sucks battery power! I have two power bank options, both with lights. The larger power bank is able to recharge my iPhone or Garmin watch 3 times over and weighs just 150g. Apart from a few leads and a plug this is all the IT equipment I need for a trip. I do have to consider though where I will be staying if I’m running more than 2 days as both the power bank(s), watch and iPhone will run-out of energy. For 3 days+ I would need to find a charge point and wait a few hours. So overnight accommodation is usually required.

Nutrition is something that will add a lot of weight to a back-pack when you’re away from sources for several hours. This is quite common partic in the Lakes, Dales, Peak District of England. Check the map beforehand – both the distances and topography. Work out how long it will take to get between sources based on this and running/walking speed, and then stock up on enough nutrition to get between points. There may be caravan parks/campsites, cafes, pubs or even farms that supply food to hikers along or near the route. You can also take water from streams if the water is safe enough to drink or you have right sterilising equipment. Churches can be really useful too. As well as providing water some even have food available, and I’ve even been into one that has food and is left open all night ‘for travelers’. Occasionally you may stumble upon an Honesty Box. This usually takes the form of a cool storage box containing various bars and cans or bottles, and a money tin. There are two of these on the Coast to Coast for example.

I would usually take a 700ml bottle (and an extra disposable bottle if required), and drink this every hour on a hot day. I don’t worry too much about electrolytes unless I was suffering cramps or it was a particularly hot day, as I’d have varied nutrition. I’d take some sterilising tablets should I need to fill from streams, and some optional caffeine and painkillers. It’s not a race so a few more cals/hr in the form of fats and proteins won’t hurt, and means you don’t have to overeat during the downtime to catch up.

I’ve done various Ultra running distances from a little over marathon distance on road, to 102 miles of cross country. I have finished 1st or 2nd in every one to date (although I have also had to DNF a few too, from pre-existing injuries). So obviously I take everything about the race quite seriously, to try and keep the record ticking along. Thankfully I’m only concerned about one discipline and I don’t have to worry about tinkering with a bike. But it doesn’t make it any less of a faff:

I’ve tried various packs over the years from reservoir backpacks (liquid is contained in ‘reservoir’ bags within the backpack with a tube attached), to 2 x bottle backpacks (bottles are held on chest straps or in side pockets), to 1 x bottle waist packs (bottle held at the back of a waist belt), or variations. When I first start Ultra running I would train with a reservoir, but preferred to race with bottles. I found I was in a lot more control of the type of hydration I was taking on board, new how much I had left, could tinker with the electrolyte levels easily, and could replenish (or dispose) of liquid more easily with a 2 x front bottle backpack. You can get some very lightweight multi-bottle backpacks on the market now, some of which are marketed as ‘vest packs’ as they are a lot tighter to the body, use less fabric (usually a flexible but robust mesh), and of course a lot lighter in weight. If you can afford them, they are a great investment. I’m quite fond of Salomon and Ultimate Direction backpacks. I’ve seen some good Ultra runners still using more traditional backpacks in races, that when loaded up can sway from side to side or jump up and down. Arguably a waste of energy, and in some cases can affect running form and increase risk of injury.

After using the 2 x front bottle backpacks for a while, which is the more popular choice in Ultra running races, I decided I would try to refine things a little more and switched down to a simple 1x700ml bottle waist pack. It’s worth doing some homework on the race beforehand to ensure you don’t fall short of hydration. Check the weather, the distance between aid stations, and know roughly your own sweat rate. I knew that with a 700ml bottle (and a quick 200ml drink while at the aid station) I could easier get through about 90mins on a warm day, sometimes longer. Bit everyone is different. I have coached Ultra athletes who require at least 1-1.5ltr of electrolytes every hour on a warm day. I’d sometimes have to adapt a little if aid stations were too far apart, perhaps taking a drink in hand for the first 15-30mins, or looking for other sources of water eg public toilets and churches (don’t bother with shops unless you’re desperate. Too much time wasted finding what you need, handing over money, and potentially waiting behind other customers). I’d have one electrolyte tab per aid station, already dropped in the empty bottle before I arrive

Each Ultra running race will usually have a list of mandatory race equipment. The longer the list, the more likely you’ll have to use a bigger pack to carry it all in. In some races I have had no choice but to use a backpack if you’re asked to carry various items of clothing for winter conditions, and gear for potential night running (high vis, head lamps, etc). I try and limit the size and weight of everything. I’d find the smallest and lightest clothing. I have a shower-proof top that weights 130g and can be rolled up to the size of your fist. I’d try and take a gillet rather than full-arm fleece and either pack away or wrap around my waist while running. Instead of a hat I’d have a light bandana wrapped around my wrist that could be taken off at any point and put around head or neck.

I have a separate phone that I use especially for Ultra running, as it weighs half as much as my iPhone. I’ll have a pound coin and a credit card, a few sheets of toilet paper, a spare eye lens (I’ve lost a couple while racing in the past), and possibly some paracetamol.

For nutrition I try to take what I need as I race. Depending on what is offered and whether or not I feel like I’ll need a pick-me-up I might pack some high caffeine gels and a protein and/or beet bar. The caffeine will be taken with the paracetamol, and the protein bar would be eaten later in the race.

For navigation I would use my Garmin 910XT watch with a downloaded course tracker to follow, and in some cases a photocopied page from an OS map(s). I usually write some splits down on my hand or the back of the page to give me something to work to. This could be splits from a previous year when I competed in an event or splits for a course record attempt. It gives you something to focus on during the race and take your mind of the pain.

And that’s it! In an ideal race I’d only require the bottle waist pack and a pocket or two on my shorts (or even under the hem, if I’m wearing lycra). Much more freedom of movement and less stress on the back. In fact the waist pack can sometimes relieve some of the stresses placed on the back when hill running. I like to think that the further I go into the race the more weight I shed from any nutrition I started with, pills and sweat loss. It helps balance the pain and stiffness from the many miles of running ;)