If you don’t count Parkruns and a 10km last Nov when I was still in ankle rehab, then April/May has seen me return to racing again. The plan was to stick to local short-distance races. 5km, 10km, Aquathlon, Duathlon and Sprint Triathlon. It seems I moved into the area at just the right time as a few 10km races have started popping up, notably in Ludlow and Nash (2nd year running) and inaugural in Cleobury and Tenbury. With the limited training time and my mind now away from the Ultra nonsense I can concentrate on developing my body again.

My lifestyle and training has taken a complete course change over recent years. I’m now in my mid 40s, a Daddy and not only finding it hard to fit the training in (7hrs/week average this year) but I’m suffering more frequently with injury and health issues that knock my training back. Overall, I’m happy with the way I am heading though as an athlete. I’m about to go into an AG (45-49) where relative performances start to drop but I seem to have found a new level of fitness (see below). For a start, I’m on the brink of breaking old 5km and 10km running times.

The first main event on the calendar was the Storm the Castle Duathlon, organised by ‘Be Endurance’, who also organise a few other events including the Ludlow 10km. Advertised as the ‘Toughest Duathlon in the UK’ I was keen to give it a go. 10km and 5km runs up and down the local hill and castle with a 33km bike in between taking in some of the hilly country roads. Not sure it was the toughest I’ve done but the running was certainly very technical.

In the 7-10 days before the event I seemed to pick up a strange numbness through both legs. A similar sensation to what I would wake up to on some road marathon races in the past. Back then I put it down to pre-race nerves by tensing my muscles sub-consciously during my sleep. I tried everything during the week including an increase in electrolytes, warm baths and massage, more rest and elevation of the legs. Nothing worked. On top of this I had a problem with the bike. I thought I could just whip it out of storage and it would be ready to go! I didn’t realise the deep rimmed rear race wheel was damaged and the disk wheel was loose. Also, the drivetrain was on its last legs. The frame itself is a small size so even with a long bar stem it’s not the most comfortable ride. Anyway, despite this I was keen to crack on and the pressure was off as this was my first Duathlon for several years.

The race itself had an interesting wave start that I’ve not seen before, based on the number of times you have taken part in the event. As this was my first STC I was in the penultimate wave (only the 45+ age group and females were behind us). There were three wave starts in front with a few mins between each. This was a little frustrating as I spent the whole 10km trying to dodge people. A little awkward and dangerous on some of the off road hilly descents. It did make it a bit more of a challenge though and I have developed a love for the hills and technical running now I’m forced to train in a valley. It was effectively 2 x 5km with a couple of loops around Ludlow Castle. A great venue for an athletics event, and very spectator friendly as we passed the same spots several times. I held 2nd-3rd place in my wave throughout most of the run but my legs were already very unhappy. Soreness, numbness and stiffness. By the time I reached transition I was really not looking forward to the bike and thought I’d struggle to get through.

Painful on the bike. I was overtaken by a couple of cyclists but got through without dropping back too much. My bike time of 1hr4min was a little off what I hoped for (sub1hr), especially as I was hitting 1hr10 in training. Into transition and I knew I just had to hold on for another 5km. The final 5km run I was probably as stiff as those around me, and by this point my legs just felt numb.

I came through in an overall time of 2hr10min. About 10min off what I expected but I completed it all the same, and was glad I held it to the end. I went for a coffee with my family and then decided we’d pop to the awards ceremony on ‘the off chance’. We had quite a shock when my name was called out as 1st AG. I really wasn’t expecting that. I came 12th overall, so was beaten by 11 youngsters ha. I now have a target for next year and hope to build up to the 2hr mark and an overall podium.

A few weeks later I lined up for the CS 10km Championships. I drove down to London for a few days to catch up with friends and cycle around my old training grounds. My legs had recovered a little from the numbness I experienced before and during the STC Duathlon. But I now had a strange crunching noise in my left knee when I squatted. No pain, just a little bit more stiff and disconcerting. Generally I felt good.

I’d recently done the Wyre Forest Parkrun in a time faster than I’d done in 2016 when I was in sub17min 5km form. So I knew I was good for a fast 10km time. I also thought the Olympic Park had to be pancake flat. Not only was it a bit bumpy and technical but there was a strong wind. Strong enough that I decided to drop back on 2 out of 4 laps into the head wind to shelter behind one of my rivals.

As I passed the timing chip line on lap1/4 I noticed the distance was 1.6mile. That meant the full race distance would come out at 6.4mile and therefore no chance of a PB for 10km (6.2mile). I decided I would just stop my watch on 10km and see what it gave me. I held my own quite well through the race, making the most of the up-hills which seemed to have become a strength thanks to my new local running routes. The standard in the Civil Service is quite high at the top end. You usually need to be a 33min 10km runner to have a chance of winning. I sprinted to the 10km mark and clocked 35:05, which I was really pleased with considering the course. At the finish line I came in at 36:30 and 7th place, (3rd mens team). 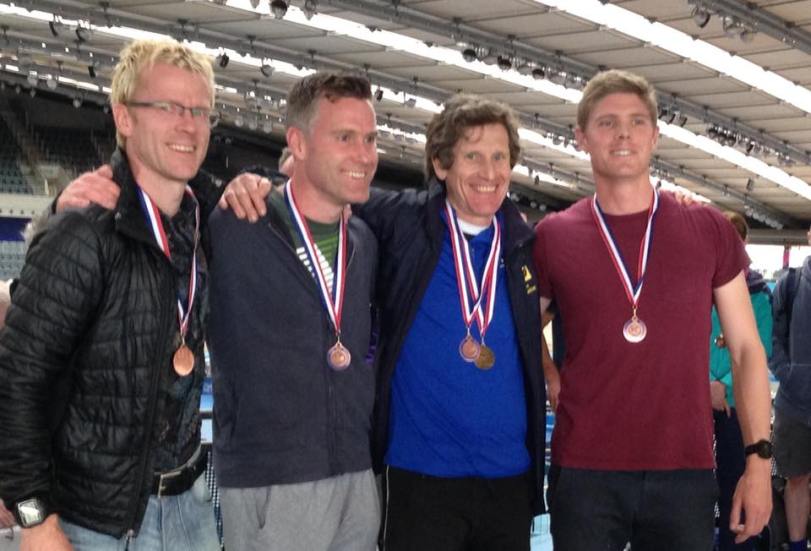 So, two good promising race results. My running form since then has shown a decent pace, although I’m still experiencing problems with my legs and knees in particular. Recently we moved home and this (including gardening!) has exasperated the problem a little and also messed up my lower back. As I type this I have just seen my local Physio who has worked on my quads and discussed some exercises to help my bio mechanics and activate certain muscle groups, particularly my gluts. Hopefully this will reduce the damage being done to my left knee. The good news is I’m not currently injured, just a little bio-mechanically deficient!

I have five local 10km races through July and August, which leaves June to continue setting up home and working on my form and developing speed. I may do a Parkrun or two in the meantime to check where I am. The Worcester Pitchcroft Parkrun is the fastest course near me, and could me an opportunity to get back under 17mins, and maybe even work towards 16:30. I didn’t expect to be able to do that in my mid 40s. One factor/variable working in my favour right now is the fact I’m not doing very long (ultra) distances. I’m working more on my speed and strength, and I’m able to recover quicker between sessions.

Over the next couple of months I hope to be getting a couple of new bikes, a decent one for racing and one to trash in training! My current two bikes are on their last legs. Once I get the new bikes the plan is to ‘set up workshop’ with the old bikes and learn a little on bike mechanics. It would be nice to be able to fix up bikes in the future without relying on outside assistance.