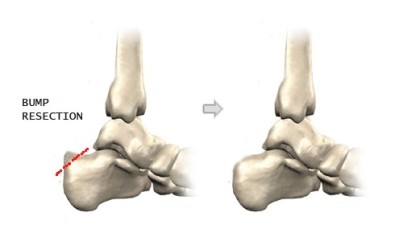 Recently I had an operation to remove the bony protrusion (Haglunds Bump) from the back of my heel bone.  The MRI scan and consultations during November-February revealed a small lump on the heel bone that had grown over several years and had become so uncomfortable last summer it was not only restricting me from running but also having an impact on walking and driving.

The decision to have the operation required a lot of deliberation.  I’ve had a few operations in recent years to remove a couple of moles (inc a melanoma) and to fix a (inguinal) hernia.  These, of course, had to be carried out.  But the Haglunds Bump, as noted by my consultant/surgeon, is something “you can live live”.  And there are accounts of people taking several months and even years to return to any form of full flexibility and strength in the ankle after the operation. 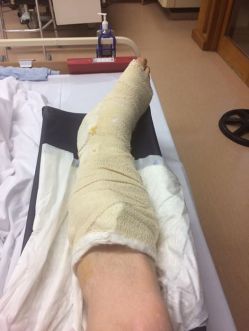 I’d also found that from the beginning of 2017 I was no longer experiencing the same pain along the achilles tendon from the rubbing of the protrusion against the back of the shoe.  But I had to bear in mind that I have not training for a number of months (parenthood and lack of sleep being one reason), so it had chance to heal.  It was a 50/50 decision and I had a another discussion with my consultant the morning of the operation about whether to go ahead with it.  In the end I decided that the pain would probably return at some point if I ever returned to ‘proper training’, and rather than have to wait another 3-4 months for an operation I may as well have it done now!

The operation took place on the afternoon of 9 March, and I was discharged the following day.  I had a general anesthetic and a local below knee anesthetic.  Despite being pestered with painkillers I was surprised not to experience any pain at all.  Apart from the odd twinge the leg was numb for 48 hours. 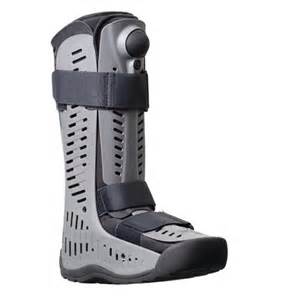 The leg had been placed in a below the knee (open front) plaster cast.  I was required to use crutches non-weight bearing for 18 days, until the follow-up appointment on 27 March.  However, I was experiencing a lot of friction pain/soreness along the base of the heel, so I returned to the clinic after just 7 days and was placed in a Robocop-style air ankle boot.  Although this was an improvement on comfort and allowed the leg to breathe, I still struggled to get the fit right and had to wear it in bed.  I was now allowed to partial (20kg) weight bear.

On 27 March my dressing was removed and the consultant was pleased with the outcome.  I am now allowed to do a little walking without the boot, get some physio treatment, and return for a follow-up in May.  Based on accounts of others who have had similar operations my progress has been quite quick, although I don’t want to tempt fate.  I’ve read it can take several months to return to training.

No race plans at the moment until I’m back into training.  But I will be doing a few hikes around the country in the summer while working more on coaching.