First of two blogs, this one being a little retrospective look back and summary of 2015.

Apart from being a rather busy year I have also had a few more health issues to contend with. I started the year nursing a pulled muscle in the lower back. And just as I was getting back into my running and managing a reasonable half marathon race time I tore a calf muscle during a recovery run. This took a couple of months to heal before I could get up to speed again. I had also developed a throat issue from the beginning of year that has required investigation and ongoing treatment. I am a little apprehensive about training and racing with certain health issues, particularly when close friends and family question it. But the specialists have never told me to stop training, in fact in some cases I have been encouraged to do so (within reason). Training and competitive racing has become a big part of my life, and I get a great deal out of it. Until I’m told to stop by the health professionals then I will continue to train. I have however made a few simple lifestyle changes based on health issues, and some concessions to my racing. For example I decided to quit regular ultra-running specific training and racing beyond 50 miles as of last summer. I do enjoy running over trails and mountains for several hours so my compromise was to do one or two (max) circa 50 mile races every year, body willing. I will instead focus on shorter distance running races (5km to marathon) and perhaps return to shorter distance triathlon. I’ve looked back at the training sessions I used to do for Ironman and they scare me. I really wouldn’t want to train in the shadow of that just to get around an Ironman distance race.

2015 was going to be triathlon focused from the start. After coming back from a one month break through back injury I managed to get a 1hr21 half marathon time in Kingston in February, and an age group prize. The calf injury happened the week after this race but the silver lining was it forced me to work a little on swimming and biking while the calf healed. It wasn’t until mid-April that I was able to run further than 5 mile again.

In May I took part in the Worcester Sprint Triathlon. The race has shrunk a little over the years which is a shame, but it was still quite amusing to win the event. I had come runner-up on three separate occasions over previous years, including when I was Ironman Pro. I only finally won the event after a lack of training or focus, injury and the ripe old age of 41. It was great fun though and I was head to head with another triathlete right up until halfway in the 5km trail run.

I was unable to train properly through the summer, just kept ticking along to try to hold on to some form. Turned up at my old Government Department’s (Defra) Sports Day, which is held quite close to me at NPL Teddington. Managed to TT 4:51 for 1500m on a grass track, which was quite a pleasing pace considering, and showed I still had a little zip to carry forward. This was followed a couple of weeks later with the Harry Hawkes 10 mile race around Kingston. A similar position to the half marathon early in the year despite a dramatic drop in pace towards the end. 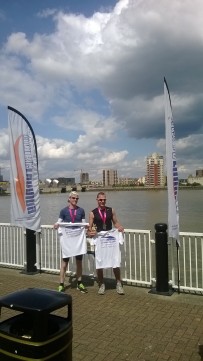 In August I took a break from training and did a week long hike/camp along the South Downs Way with my brother Dean. As soon as I returned I helped officiate the 4-day Thames Path ultra-running race along the Thames. I met some very interesting individuals and really enjoyed my time there.  Each day/event was also run separately so on the final day I decided to run [in the Richmond Ultra] myself and be part of the experience.

A great route from Kingston, through Kew and Peckham on to Westminster, finally finishing at the Thames Barrier. I was once again pleased with my pace, managing to just about stay with Paul Wathan for the majority of the 28 mile race (which actually ended up as 31 miles). After a few navigational errors and a break at a shop (!) we decided to finish together, which was nice….especially as he certainly could have left me for dead before the end!

Another local 10 mile race in October with a similar time (58-59min) and position. I was then off to Lanzarote to provide some private coaching and get some training in myself.

Canary Islands are great for sea swimming, cycling and off-road running. I particularly enjoy mountain running and beach running/bouldering in the heat, taking some basic swim gear along. A short break on my return and then a 10km in Battersea Park to check my form. 35min was a real struggle (when is a 10km not a struggle though!) but it was acceptable. 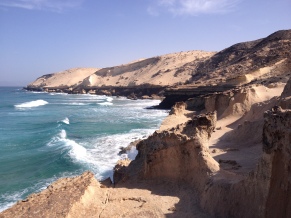 At the end of October I was flying back again to the Canary Islands, this time the southern end of Fuerteventura for a holiday with Yve. No specific training, but I still managed a few early wetsuit swims and some decent beach runs. One in particular left me possibly the most physically depleted and dehydrated than I have ever been, but a great adventure.

Overall it’s not been a year to stand out for me. I have always been prepared for the inevitable decline in performance as a result of age, but even though I’m now in my 40s I still feel I can eclipse my old personal bests both in terms of personal TT and racing. And despite the lack of training this year I haven’t been too far away. It usually takes a solid mesocycle (usually 4 weeks) or two to get up to speed in running, with a little longer for swimming. I have to of course keep check of my weight and balance-out the training really well otherwise I run the risk of over-training and/or injury. But that’s always part of the fun and it’s something I take very seriously with the athletes I coach. I find that conditioning and balance work is becoming increasing important at my age, and although marginal I can feel some benefits in the way I physically carry myself forward and proprioception.

So I’m able to finish 2015 (relatively) injury free and get some reasonable weeks of running under my belt. I’m on circa 40 miles/week at the moment. This is just a foundation to allow the body to settle in. All being well I will increase this in the subsequent mesocycles as I would like to put in a good performance at the Green Man Ultra (c.45mile) in March. I’m keen to smash my old PB on the course. I did the previous time with the hernia and navigational errors, so all being well I’d like to have the perfect run-up to this event and get the first part of the year off to a cracking start.