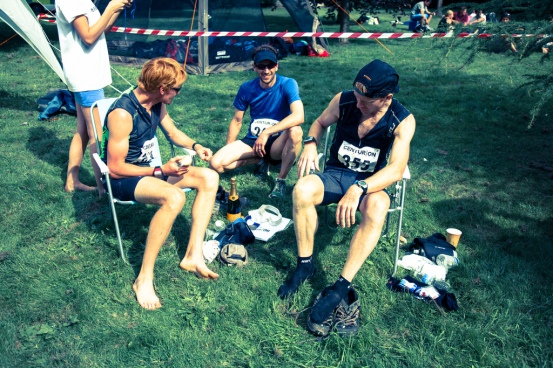 The week after the Cotswold Way 102mile trail record (CWR) I was understandably quite fatigued and stiff and enjoyed catching up on sleep and junk food.  I was surprised to find that my legs were not as sore as I was expecting.  In fact if it wasn’t for stiff and inflamed/swollen ankles I may have been able to do some light runs.  As it was I could barely walk.  Towards the end of the first week I started doing some light bike rides and swims.

It wasn’t until eight days later that I finally managed to get my running legs back.  Unfortunately once the swelling had died down I found the achilles tendonitis (left foot) had returned and was quite painful to run on.  I was less than two weeks away from the North Downs Way 50mile Ultra (NDW50).  I knew I wouldn’t be 100% so soon after the CWR but was confident that if the achilles eased-off then I could still turn up and have a decent shot.  In the final few days I decided to at least make the start and line and see how it went.  If it was too painful at the first check-point then I would declare my DNF to an official and hike back to the car.

The NDW50 is a 50 mile point to point run starting in Farnham at the western end of the North Downs, and travelling past Puttenham and Guildford following the North Downs Way National Trail. The course then continues on to Ranmore Common before the steepest climb of the race up to the top of Box Hill. The trail then drops down the other side and back up to Reigate Hill, on through Merstham to Oxted and a further 8 miles to Knockholt Pound and the 50 mile finish at the outermost edge of the Greater London boundary.

Centurion Running also organised a 100mile ultra race on the same morning, 90mins before the start of the 50mile race.  There were up to 150 entered into the 50mile race.

I had already run parts of the course in advance so knew what to expect regarding hills, terrain and navigation.  The organisers provided ribbon on all turning points which certainly helped.  But I also took a Harveys map and GPS.  My only fear in competitive ultra racing is getting lost!  Best to be prepared.

I drove down to Farnham Station with a friend, David (who was also damaged goods with an old calf injury).  We were both looking forward to the event and were well rested.  After registration and a race brief we all walked down to the start line.  It was a  warm and clear morning and everyone was itching to get started.

The organiser had provided a preview before the event which included a list of ‘ones to watch’ for both the 100 and 50mile events.  I was the only man mentioned in the 50mile event and it was quite a surreal experience standing next to three guys talking about me at the start line.  They obviously didn’t know what I looked like.

I was feeling quite excited about the race, and I loved the course so I decided to give the course record (7hr35) from last year a shot.  I’d already written down the splits from the record so had something to pace to, and would aim to undercut each split as I passed so that I would have a buffer towards the end when I would inevitably tire.  I also wanted to get under 7hr30 for a 50mile technical/hilly ultra – so that would be the main target.  With this in mind I also paid a lot of attention to my gear to make it as lightweight as possible.  I used 2XU compression shorts and tri vest with inov8 socks and shoes.  I placed heel cups in the shoes and Yve taped my left achilles/calf up with Kinesio tape.  I started with 200+300cal gels and a 750ml bottle of electrolytes on a waist belt with nuun tablets for later.  I wore a cap rather than sunglasses for a number of reasons but mainly the changes in light going in and out of woods.

At the start I went fast although I only realised this when I checked the first mile split (6:58), which for an off-road race sounds a bit too quick.  But it felt comfortable at the time.  Interestingly I was on my own almost immediately, in complete contrast to a race like the Brecon Beacons Ultra where a group would run the first 3miles at 7:00-7:30/M with backpacks.  I didn’t drop the pace but found that any sharp turns and gates or stiles would drop the mile splits anyway, and provide brief respites.

At 2 miles the left achilles started to get painful.  I expected this to happen at some point in the race but was hoping it would be a little later.  I tried to run more carefully and hope that it would loosen and warm-up a little as the race progressed.  I did indeed find that the pain ‘numbed-out’ and I put it to the back of my mind.  It didn’t really have an impact on my race.

After 3-4 miles just south of Seale I ran across a long open field and timed myself.  It came out at 2:45 and when I looked back I saw no-one.  I was surprised at this as it meant I had run 40secs+/mile quicker than those behind me and I didn’t feel like I’d pushed it.  A good sign.

At 7 miles I reached Checkpoint(CP) 1.  I believe they had moved it a little closer than last year so didn’t pay too much attention to my split and instead topped up my bottle, grabbed a couple of gels and waved to the marshals (inc Henk, who is the man behind the Caesars Camp Endurance runs.  It’s great the organisers of these races help each other out)

Everything was going so well, the sun was out, the scenery was terrific and then a problem…I wasn’t paying any attention to what felt like a barbed branch coming out at eye level on the trail.  It whipped across my face and dislodged my right contact lens!  It makes me wonder whether the lens actually saved me from a scratch.  Anyway, I hunted a little for it by massaging around the eye but it wasn’t there and I had to decide whether or not to take the other one out to balance-up my vision or run with what at the time felt like a kind of tunnel-vision.  I wasn’t able to run with confidence over uneven surfaces  (including dodging stones and tree roots), but I wanted to be able to see signs coming up so that I didn’t get lost, so I kept the other lens in.  It made for an uncomfortable race and in hindsight I would have either carried a spare or taken the other one out.

At CP2 (12.5miles) I took a longer break (1-2mins) and would take the same time at the remaining four CPs before the finish.  I need to try and limit the time taken at checkpoints/aid-stops as they can eat into your overall time.   There were no gels at this CP so I filled up the bottle and grabbed a load of high GI products to eat alongside my gels before the next CP at 24miles and the start of Box Hill.  This was the longest section so I knew I would be limited on liquid (750ml) on what was turning out to be a warm day.  I drank a few beakers of water before I left and made sure I took a few more at the other end.  I was only 4mins up on the 2011 course record despite what I felt was a decent pace.  I needed to keep the effort up.

The temperature had reached 25c by the afternoon so when I reached CP3 (24miles) I poured some water over my head and took a nice lazy break before preparing myself for the climb up Box Hill.  It’s so steep that they had to provide steps.  It was now 3hr14 into the race and I was 5mins up on the course record.  I decided to press hard up the hill by breaking up walking with several fast steps.  I was now well into the 100mile field so would exchange a few words as I passed them, wishing them good luck (I was glad I was only doing the ‘sprint’ event).  At the top of Box Hill I proceeded to get my pace back up again.  I was looking forward to the change of scenery Merstham would offer (school, golf course, church, etc).

At CP4 (38miles) I started to struggle from fatigue and dehydration.  I really wanted the race to be over and was glad of the shorter final sections.  The next section was marked as just 5miles in length.  At 41 miles I could hear breathing from behind and was passed by someone looking quite fresh.  He mentioned he was doing the 50mile race and looked to be running a good 30secs/mile quicker than I had to that point.  I tried to stay with him for 1mile but then had to let him go, I just didn’t have anything left in the legs.

As I climbed the steep hill to CP5 (43miles) I decided to take a bit longer than normal and get plenty of liquid and food on board.  It was now all about holding second place.  At this point I was 10mins inside the course record so it’s not like my pace had dropped!  After munching on a piece of water melon I picked my pace back up and hoped the guy in front would hit a wall (you never know).  However, the wooded section had a lot of tree roots that I struggled to see clearly because of the one lens, so I had to be a bit more tentative and lift my feet more.  The final few miles were over undulating farm land but I kept my head down and introduced the odd short walk on approach to stiles and gates to break it up.

I crossed the finish line in a time of 7hr27mins, this was 5mins behind the winner.  We both finished inside the course record.  I was disappointed with the result, but not the performance.  Considering the CWR may still have been in the legs and the issues on the day I achieved my main targets and felt like I’d put in a solid effort.  My Garmin watch measured the course at 51.1miles, so I can now look towards <7hr-7hr15 for future technical 50mile races.  Fair play to the winner for balancing his effort out over the distance, and coming through stronger.  It was quite interesting to see how our splits compared over the distance.  If I’d known he was closing in I would have probably reduced my CP times and increased pace (I might take my iPhone next time).  But then he would probably say the same!

I have had two weeks to recover from the race and as I type this I’m still struggling with the achilles tendonitis.  I have re-introducing a little swimming, cycling and gym work into my training though and with a sprint triathlon coming up in two weeks this is will actually be quite useful.  I’m just going to enjoy the triathlon and have a nice day out with friends.  Before then I will have another 3-4 days in the Lakes with my father and brother – hoping to do a little running (Coast2Coast, BGR or a bit of both), wild camping, and drinking.  It’s a shame our summers are so short!