An interesting couple of weeks.  With some help from my physio I’d managed to shift the sticky left hamstring issue and get myself back into shape the week before the Grand Union Canal Race on Sat 2nd June (report below).  I still wasn’t 100% but felt a lot more positive about what lay ahead.  The week after (Sat 9th June) Yve and I travelled down to Avon Tyrell and the Enduroman events being held there.  We were crewing for Jo Kilkenny in the 100mile Ultra so were prepared for another sleepless night.

I was physically in much better shape now to start the GUCR, a 145mile run from Birmingham to London along the Grand Union Canal.  However, I always said it was going to be a push whether or not I finished having concentrated mainly on 50mile technical (hilly, navigational) races and only one (hilly) 100mile race.  I’d never run anything of this distance on the flat.  As it turned out I struggled a lot more than anticipated and I’m still unsure what the problem was.

One fact that played a big part was lack of pre-race sleep.  I’d had about 5hrs total over the previous two nights due mainly to outside noises.  I was yawning through the race, which is never a good sign.  The race itself is well organised and over-subscribed.  I had to go through a ballot just to get my place on the start line!  So it almost felt a privilege to line up along some decent names in one of the toughest ultra races on the UK calendar.

My crew for the event were Dan, Jo and Yve.  Dan had stayed the night at the same hotel and would be crewing me up to Buckby Locks at 48.5miles into the race.  This is where Jo and Yve would then join him (having taken trains down).  At a little before 6am I met up with Peter Cusick, who I’d planned to run with for a good part of the race.  We’d discussed various run/walk strategies before the event, something I’ve not done before but was keen to try out.  The plan was to roughly walk 5 out of every 30mins (to include aid stops).  We’d use these walking breaks to eat solid foods.  The rest of the time (running) I’d sip away at a High5 sports drink and managed to average 450cals/hr without any problems.

At 6am we were off!  I saw Bruce Moore zoom into the lead and before long he had disappeared.  I’ve seen him race at the Malvern Hills Ultra and know he’s a fast starter.  Pete and I stuck to the pre-race plan quite well, despite our concerns we’d get carried away with the occasion.  I was expecting our pace (8:00-8:30/M) to feel a lot easier than it did, which was worrying.  I was quite stiff in the hamstrings but had experienced this in my previous ultras and hoped it would iron-out.  The weather was wet and cold and perhaps in hindsight I could have worn a little more as I can react badly to the cold over a period of time.  But at the time I thought I’d wait for the weather to improve (as indicated by weather forecasts).  It didn’t.

Running behind Pete, 20miles in.

Dan did a great job of turning up at the agreed aid stops with nutrition in hand.  Pete had to pull out after around 30miles because of a back issue, but having been passed by Richard Quennell I now had someone to focus on/pace to.  It was after 45miles that I started to experience stiffness again in the upper legs, only much worse.  My pace had dropped to 8:45-9:00/M on the move which was ridiculously slow for me at that distance on the flat.  I decided to stop any walking breaks and eat on the move as my heart rate was quite low.  With just a few miles to go until a scheduled 5min break at Bucky Top Locks I put in a little more effort and overtook Richard and caught Bruce.  My crew had been joined by my cousin at Buckby and they all did a great job of feeding me, changing socks and shoes.  I decided at this point to try my new Hoka shoes out and see what all the fuss was. 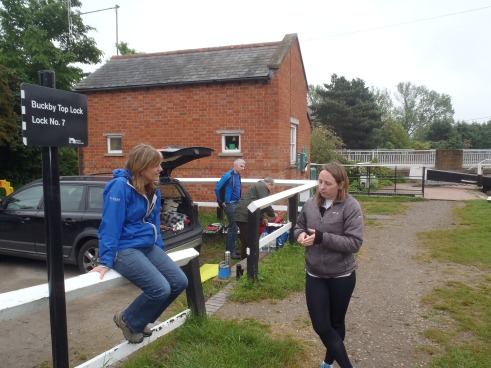 An Irish person holding a pint of something black…she said it was coke!

The first few miles seemed quick enough but then I’d just had a break and was keen to catch up with the leaders again.  However, my legs were starting to seize up and the Hokas didn’t help.  I was now back in 2nd place, but from 55miles I had to start reintroducing short walking breaks out of necessity rather than choice.  One thing that did raise the spirits was the Jubilee celebrations taking place along the canal, and I was half tempted to knock back a glass of champagne offered to me by a canal-side party.

I remember the final 1-2miles to the next aid stop at 63miles being a walk.  The upper leg muscles had seized up to the point that I could no longer run a single step.  But my crew had put a lot of their time and effort into helping me in this event.  I didn’t want to let them down so for their sake I started the next 5mile section.  We did however take another 5min break here.  Yve massaged the legs with a “German horse cream” she had brought back from a recent trip to Germany (It’s now used on athletes!), and we did a complete overhaul of clothing.  I actually felt nice and warm and comfortable for my final 5miles….all of which were done at circa 19:00/M!  Debbie (the eventual winner) came past at this point looking fresh as a dasiy!

Overall it was an interesting but painful experience.  I knew I’d struggle at this distance on the flat, but I didn’t think I’d have struggled so much.  I’ve run quicker on very hilly races over the same distance without my muscles seizing up like that.  Having chatted it through with my physio it seems a combination of running on the flat and pre-race fatigue.  Who knows.  I’m hapy developing myself over technical 50mile races for the time being but will try the odd 100mile event.

Last weekend I returned the crewing favour by heading down to Avon Tyrell with Yve to support Jo  in the 100mile ultra run event.  There were a number of events being held at the same venue (from Half Ironman-distance to Deca Ironman).  Jo started the race really well and looked comfortable when we arrived.  But as the night rolled in we could see she was having issues with staying awake (lack of pre-race sleep, similar to my predicament the previous week).  On top of this she had her own cut-off point (Sun 4pm – 26hrs into the race) when she had to catch a local train to get back to Sheffield.   She didn’t make it but showed true grit to fight the clock as long as possible.  An awesome athlete.  I’m hoping she’ll return next year.  I will probably do the same.  It’s an undulating course and soft underfoot which should suit me.

Off to the lakes in a couple of weeks to get some hill training in. Can’t wait. Hopefully I will have better weather this time so I can recce the Bob Graham Round in full. I’m keen to do the recce in 24hrs but to have a wild camp en route, perhaps at Priest’s Hole (a cave off one of the summits). 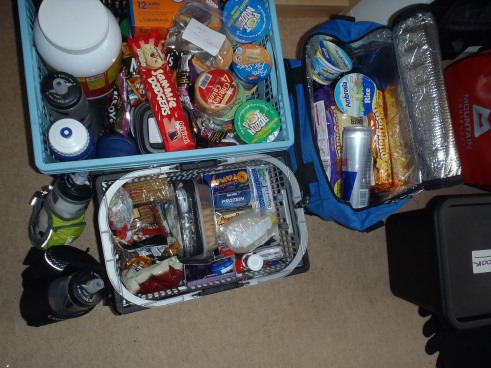 I’m still working my way through this lot!