Less than a week until my 8th Ironman-distance race, and probably one of the most important.  Ironman Germany is both the European Ironman Champs and also a qualifier for the World Ironman Champs at Hawaii. I’ve never considered racing at Hawaii and skipped an opportunity (on roll-down) at my first official Ironman event.  But it’s something I’d like to do now, while I’m at a decent level.  It would also provide a stunning holiday for Yve and I (after the event). More below, including how to follow my progress live at Ironman Germany.

It’s been a busy few weeks work/coaching and preparing for the race. The glue-ear has long gone but I picked up a pain in the lower back two weeks ago. I thought it was another niggle/tweak that I could shake off (more often than not), but it’s lingered and been quite painful in the morning. I saw my Physio today and was told that I had a fair bit of tightness in right glut and lower back, which has thrown off/imbalanced my right leg a little. After a 1hr40 session (at 45min rate – talk about value for money!) I had an arsenal of stretches and mobilisation exercises to be getting on with before Sunday. It may or may not explain a recent heaviness in my legs and poor form. 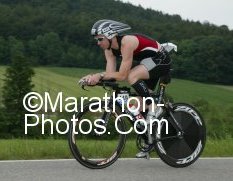 I’m finally relatively happy with the bike set-up. I managed to get my original larger bar pads back and found a way of folding them over so the elbow is ‘encouraged’ to go closer to the midline. The top of the bar stem and ends of the tri-bars have also been chopped (Cheers Rich!) and I’ve taken the bars down a notch. I did a turbo set-up test today and had the thumbs up from Yve – the elbows are now flush with the knees, with the knees coming up to the elbows on mid tri-bar grip. The perfect position, as used on the Argon bike in Challenge Roth last year (4:46 split for 112miles).

It makes me very compact. Had a good chat with my Physio about possible stretches to do at the start of the Ironman run to loosen up the lower back, without wasting too much time.

My current concern is the (lake) water temp. If it breaches 24.5c on the day then they will ban wetsuits. It’s been gradually building up over the last week from 19-23.8c <30 June>. A non-wetsuit Ironman would be a nightmare for me. I have no leg kick, and train predominantly with a pull-buoy between my legs (with open-water in mind). Take the wetsuit away and I’ll have to fight against the extra drag. An extra 10-15mins overall time AND wasted leg energy. Could mean as much as 20mins on my overall time and the end of any Hawaii aspirations.

Here is a pic of the final bike set-up for Ironman Germany. 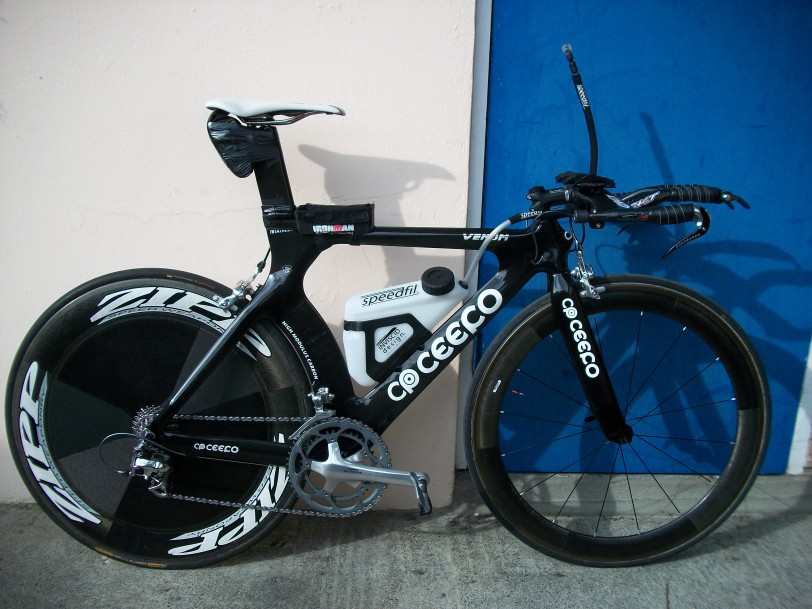 You’ll see I have a small bentox box just before the seat post. I can usually cram a couple of energy bars and halved protein bar (wrapped in rice paper) in there, along with some salt sticks and paracetemol tablets, should I need them. I will not finalise race nutrition until the day before, but I’ll probably have around 8 gels either taped to the bike frame or under my shorts. I borrowed an Elite Tufo tubular tyre as a spare as they roll compact.  You can see that about 5inches of it go under the saddle, which also helps hold it in place.  Inside the wrapped tyre is a co2 cannister, head adaptor, key and spare extender.  I have yet to find space for a second co2 cannister.  This all covers one puncture and 1 x failed co2 cannister application.  If I get a second puncture then it’s curtains, but I’ve never punctured in an IM so fingers-crossed.  The Speedfil hydration bottle carries up to 1.2ltrs. I will be using only this bottle, topping up at aid stations with water and electrolytes and dropping in the odd salt tablet.  The straw has yet to be tied to the bike properly but you can see how it fits snugly in the CKT gap (below).  I will be wearing the same tri-top and shorts as Roth last year.  The shorts are perfect for carrying gels, both in the side pockets and trapped underneath, abover my quads. The orca top is both pocket-less and seamless to reduce drag over the back. 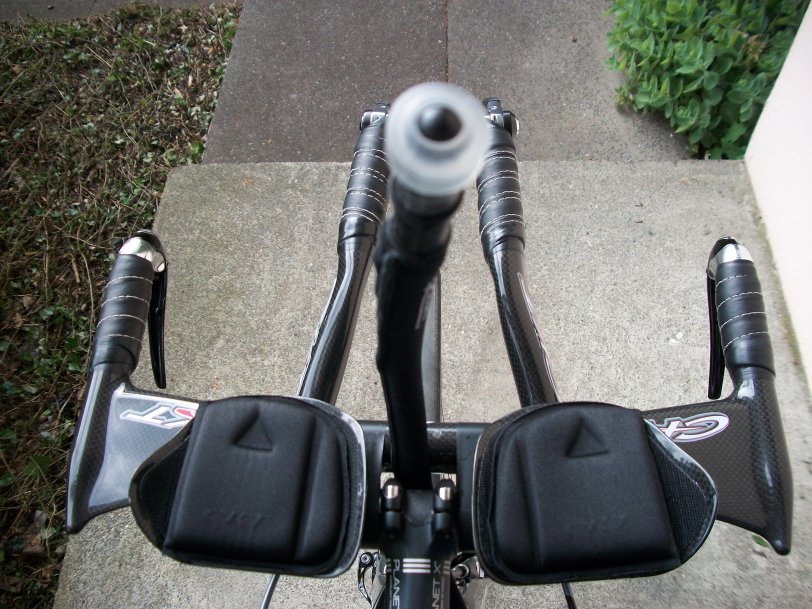 As I have said, this is a qualifying event for the Hawaii World Championships in October. There are a number of places/slots allocated for the top Professionals and age-groupers (amateurs). I will be competing in the 35-39 age-group. There are 19 slots in this age-group (male).  That is quite a lot, but then it IS the European champs, so standard is generally a little higher at the top-end.  In short, this means I have to finish in the top19 of my age-group to get an automatic place. If I finish just outside then there is still a chance – at the awards ceremony if any of those 19 finishers don’t accept there Hawaii place, then it will pass from 20th position downwards….until all 19 slots are taken. It costs around 450euros – paid in cash, at the time.

Had a look at last year’s slot allocations in my age-group. First place came in around 8:38, with second in 8:48 and third in 8:50. 11th-18th were in the 9:20s, with the last going to 9:31. I did 8:58 at Challenge Roth (ironman-distance) last year. Without problems at the start of the swim I’d have been looking at a possible <8:55. I also had sleeping issues leading up to it, with just 3hrs on Friday night from an impinged nerve in the shoulder. I can’t say whether my fitness has improved over the last 12 months so we’ll have to wait and see, but here’s a rough estimate based on last years age-group splits, the extra 5km on the bike course (due to road works), and potential non-wetsuit swim:

I’ve been smack on with predictions for the last two years but this year has too many variables (inc the wetsuit issue and Ceepo bike) that I can’t say. Should be an interesting race.

The race is split into two wave starts – 6:45am and 7:00am. The Pros and 300 selected age-groupers start at 6:45, with the masses ( inc myself) at 7:00am. My plan will be to go hard for the first 1min, then settle in to a hard glide technique on decent feet, which has worked well in the two recent olympic-distance triathlons.  If I can get a good draft then my swim times are usually pretty decent. If I struggle with my breathing like last year then I’ll get drawn in to the ‘washing machine’, and it becomes an arduous task to fight for space.

I have a pair of compressport compression socks to try out in the race. They fit a little more snugly than my old 2XU so hopefully it’ll save the calves a little on the run. I usually go quite hard on the bike leg, just off time-trial pace. My legs/knees are toast by 80miles but I know that I just have to struggle in to transition2. Last year I fought to hang on to an average of 23mph using my Garmin Forerunner. This year I will try to do the same. If I can do that with the extra 5km then I know I’ve done well.

The run-off in a long-distance has always been my strength. I can run an Ironman marathon at 30sec/mile off my straight marathon pace. I’ve slowly been bringing my Ironman marathon time down to the magical 3hr mark. I did 3:08 at Roth having picked the pace up for the final 8miles. I’ll be looking for a pace of 7:00/mile or <4:20/km splits as I go.

So that’s the plan! If you want to follow me live on the day then here’s what you have to do:

You may have to refresh the page, or close and go back in to get an update. The swim will start at 7:00am (6:00am BST), so my first/swim split will come through hopefully one hour later. The page will also show my current age-group position. Remember, I have to finish in the top 19 by the end of the race. The swim is my weakest discipline, followed by the bike and run so you should hopefully see my position climb as the race unfolds.

Driving down with a friend (Dan) on Thursday morning.  Friday and Saturday involve race check-in/registration, equipment checks and bike racking, deposit of bags, pre-race briefing and some tri-shopping.  Monday is the awards ceremony and Hawaii slot allocation, then we drive back on Tuesday.